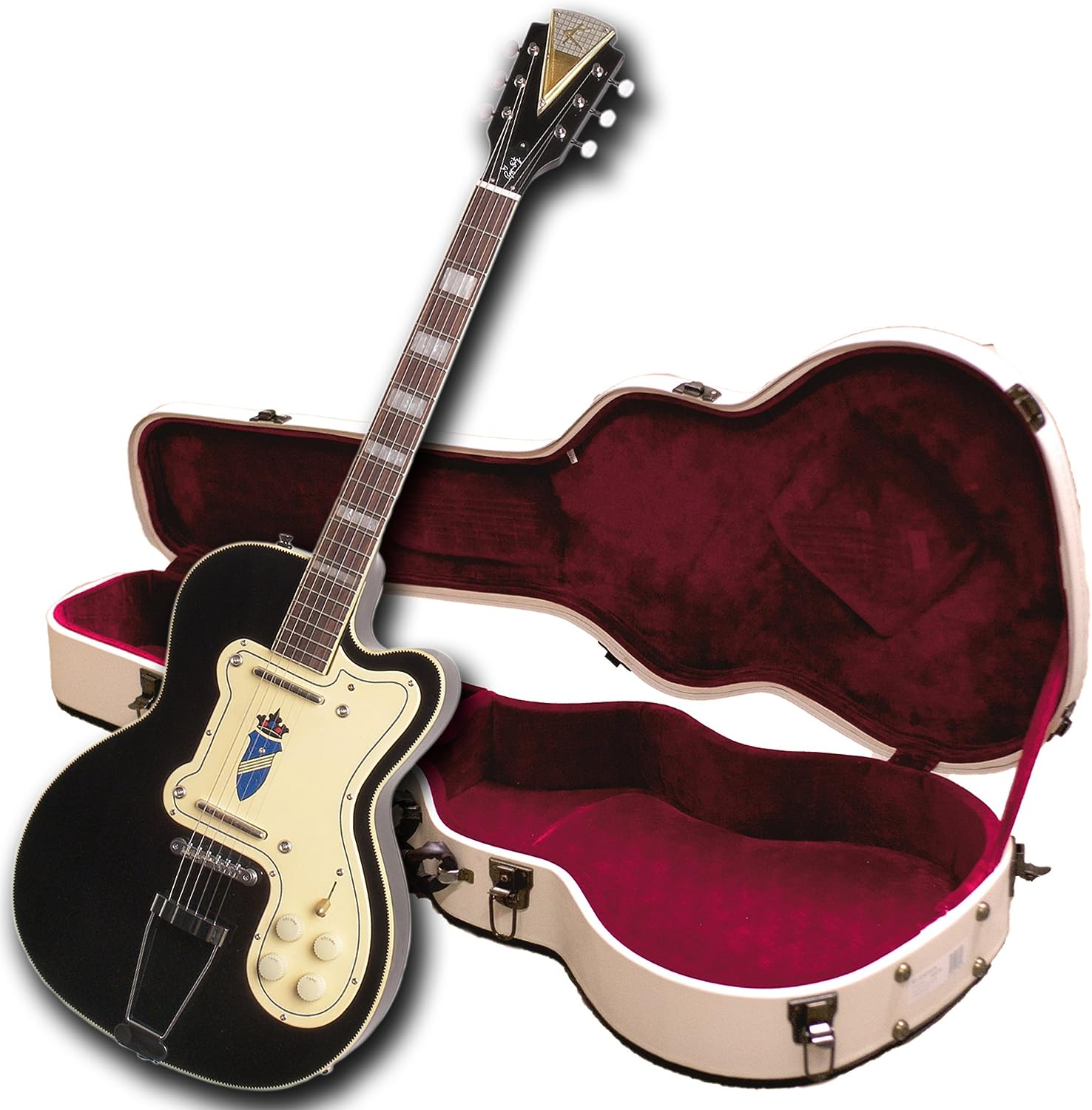 The K161 Kay Thin Twin electric guitar was originally introduced in 1952 and was known as the "Jimmy Reed" or "Howlin' Wolf" model.

"p" T-Bone Burnett played a Thin Twin to back up Robert Plant and Allison Krause at the 2009 Grammy Awards. "p" The Thin Twin was the first guitar able to create that unique blues sound from the special Kay tri-chamber interior bracing that made the instrument a favorite among blues players as well as rockers of the '50s and '60s.

"p" The Kay Jazz II was the cutting edge of electric guitar designs and is among the most famous and revered Kay Vintage collected guitars. "p" The Kay K775V Jazz II has features that are as relevant today as it was when it was originally released in the 1961. "p" The Kay K775V Jazz II is an extremely versatile instrument for stage and studio, due to guitar's ability to deliver a range of sounds from warm jazz to shredding heavy metal.

In 1963, a 17-year-old Eric Clapton used Kay Jazz II while with his first band "The Roosters".

Striking beauty, tone and playability make this guitar an overall winner in any style of music and provides a vintage-chic that will wow the crowd.

The K162 Pro Bass is one of if not the first electric bass guitar available in the world.

The K162V Kay Pro Electronic Bass Guitar, a reissue of the classic K162, has the volume and bite of an electric bass guitar, but when plucked softly, sounds like an upright bass.

Solo and rhythm effects are unlimited. Get that unique Chicago-style jazzy blues sound from the semi-hollowbody chamber design and single-coil blade pickup.

A special dual-capacitor switch kicks the Pro Bass into overdrive. It cuts the high range and adds punch and the deep tone of a standup bass.

The Jazz Special Bass has been the most coveted Kay Model by collectors and is very rare. So sought after that even The Fab Four (Internationally acclaimed Beatles tribute act) and Paul McCartney Wings tribute frontman Ardy Saraff had to have one for his arsenal!

It was featured on the cover of McCartney's 45-rpm single "Jet", the performance video from Wings for "Junior's Farm" and again in the video "Ebony and Ivory" and was the bass used the band, The Sufaris", in the '60s to record the hit "Wipeout".

Known for its thumps, subsonic low end and slim neck as well as its woody tone, the hollow body construction and exclusive bracing system make this bass ideal for live and studio use. The luncheonette countertop pickguard combined with the Kel-von-a-tor headstock gives the Jazz Special bass its avant-garde appeal.

Despite the Indian Navy's head start in the 1990s, China's carrier capabilities and virtually all carrier-relevant industries have overtaken India's in scale and sophistication.

Punjab is a microcosm of both the Congress party’s problems and those of the Indian opposition more broadly.

From Delay to Desperation: The Story of Sinophobia and COVID-19 Vaccines in Vietnam

During its recent COVID-19 outbreaks, the Vietnamese government has found itself trapped between the virus and a Sinophobic public.

Philippines Presidential Race: Marcos and the Specter of Martial Law

From Delay to Desperation: The Story of Sinophobia and COVID-19 Vaccines in Vietnam

A new DRI Trendlines report describes, among other things, how climate change and urbanization interact in the Asia-Pacific, leading to new traditional and non-traditional security risks.

How Does China’s Military View India?

The PLA views India’s growing military cooperation with the United States with some concern but generally does not consider India a major threat.

Melbourne Protests and the Disinformation Wars in Australia

The violent protests prove that Australia shouldn’t be complacent about the effect of misinformation and disinformation on the country’s social stability.

The move reflects Bangkok's new policy of balancing the endemic reality of COVID-19 with the need to reopen crucial sectors of the economy.
DRI REPORT NO. 5
Dense Grey Webs Cyber Risks and Trends in the Asia-Pacific

The move marks an acceleration of the country’s timetable for the restart of its economically pivotal tourism industry.

The next few weeks will reveal if the country is prepared for a COVID-19 endemic phase, or if it will experience another wave of hospitalizations.

North Korea is one of the few countries in the world not to have started a COVID-19 vaccine program.

By Amalyah Hart and Joshua Mcdonald

Samoa has its first-ever female prime minister, and the first new leader in 22 years. But Fiame Naomi Mata’afa comes to power at a fraught time.

Peace vs. Democracy in Cambodia

The 1991 Paris Peace Accords had two primary goals: ending civil war and setting up democracy. One of those goals was achieved; the other has never looked less likely.
Creamy bone white speckled beads and hand painted Zebra adjustab

Beijing and the UN, 50 Years On

Since taking over the China seat in the United Nations, Beijing’s approach to the global body has encompassed both ambivalence and ambition.
The Ginger People Gin Gins Chews, Original, 4.5 Ounce (Pack of 1

Are China’s BRI Glory Days Over?

The valuable experience gained by Asian companies during the pandemic could upset the West’s monopoly in high-value drugs more generally, with implications for global access to medicines.

What Do Taiwanese Think of China’s Record-Setting Incursions Into Taiwan’s ADIZ?

Alfred Nobel, Technology, and the End of War

The namesake of the famous prize believed that more destructive weapons would make war unthinkable. Few people believe that anymore – but we have new delusions to contend with.

What Would an End-of-War Declaration Mean for the United Nations Command?

The move marks an acceleration of the country’s timetable for the restart of its economically pivotal tourism industry.

Furious Farmers Are Taking on the Might of the Indian State

The brutal killing of a group of farmers by a BJP minister’s son has galvanized protesting farmers and opposition leaders alike.

North Korea is one of the few countries in the world not to have started a COVID-19 vaccine program.

South Korea: Picking Winners and Losers in the Information Age

By Florentine Koppenborg and Ulv Hanssen

Japan PM Kishida’s New Ministry and the Legacy of Abenomics

Will Japan’s Kishida Take Relations With the Koreas in a New Direction?

Indo-Pacific Trade: Bring Washington Back to the Table

By Ami Bera and Wendy Cutler

The Biden administration should prioritize a forward-looking and impactful economic and trade agenda with the Indo-Pacific region, especially when it comes to digital trade.

After the Fall of Kabul, the US Needs to Reject China’s Narrative on Terrorism

PNG’s Prime Minister Wants to Save His Country’s Rainforest. He Can’t Do It Alone.

What Does ‘Free and Open’ Really Mean for the Indo-Pacific?

Kyrgyzstan: A Year Since October 2020

It’s been a year since Kyrgyzstan erupted in post-election protests and precipitated the fall of yet another government in Bishkek.

How Do Central Asians View the Taliban?

Tensions Rise Between Tajikistan and the Taliban

By Philip Citowicki and John Blaxland

The two "strategic cousins" could grow closer as a result of their shared frictions with an increasingly assertive China.

AUKUS, Australia, and the Importance of Trust in Foreign Policy

Where Does the China-India Border Dispute Stand?

Myanmar, Six Months After the Coup

Where Did COVID-19 Come From?

Webinar Alert: Where Did COVID-19 Come From?

AUKUS and the Indo-Pacific: Geopolitics, Technology, and Deterrence

What does the new U.S.-UK-Australia trilateral cooperative partnership entail?

The Biden Administration and US-China Relations in 2021

Vaccination in an Indian Border District: Against All Odds

A Visit to Pangong Lake

Thai Protesters Face Off With Police in Bangkok

Furious Farmers Are Taking on the Might of the Indian State

Wendy Cutler on China, Taiwan, and the CPTPP

AUKUS and the Indo-Pacific: Geopolitics, Technology, and Deterrence

Vaccination in an Indian Border District: Against All Odds

Is ASEAN Ready for the Disasters of Tomorrow?

Ready or Not, Cambodia Plots its ‘New Normal’